Ants are among the most common pests in buildings. They are also found in restaurants, hospitals, offices, warehouses, and other buildings where they can find food and water. On outdoor (and sometimes indoor) plants, ants protect and care for honey producing insects such as aphids, whiteflies, and mealy bugs, increasing damage from these pests. Ants also perform many useful functions in the environment, such as feeding on other pests like fleas, caterpillar's termites, dead insects, and decomposing tissue from dead animals. CALL WHEELER'S PEST CONTROL IN ORANGE COUNTY.

Over 12,000 species of ants live throughout the world. In Orange County, Riverside and Los Angeles County, a only a few ants are important pests in homes or businesses The most common ants occurring in and around our homes and businesses are:

Ants are close relatives of bees and wasps. They are familiar insects that are easily recognized, especially in their common wingless adult forms, known as workers. However, winged forms of ants, which leave the nest in large numbers in warm weather to mate and establish new colonies, are often mistaken for winged termites, which also leave their nests to mate. Ants and termites can be distinguished by the following:

Inside buildings, ants feed on sugars, syrups, honey, fruit juice, fats, and meat. Long trails of thousands of ants may lead from nests to food sources, causing considerable concern among building occupants. Outdoors they are attracted to honeydew, produced by soft scales, mealy bugs, and aphids. This liquid excrement contains sugars, and other nutrients. Because the ants protect scales and aphids from their natural enemies, outbreaks of scales and aphids are not unusual when ants are present, causing damage to you plants.

Ants can bite with their pincer like jaws, although most species rarely bit. The velvety tree ant, however, is an aggressive biter. A few ants sting, including native fire ants, the red imported fire ant and harvester ant which are primarily outdoor species, and are the most common stinging ants in California. An aggressive stinging ant, the red imported fire ant has been found in Orange County, San Diego County and Los Angeles County. If you suspect a fire ant infestation, report it to your county agricultural commissioner.

Ants nest in soil; nest sites vary with species but are often found next to buildings, along sidewalks, or in close proximity to food sources such as trees or plants that harbor honeydew-producing insects. They also construct nests under boards, stones, tree stumps or plants, and sometimes under buildings or other protected places. The pharaoh ant nests indoors preferring warm, moist locations, often in wall voids, under flooring, or near hot water pipes or heating systems but is also found nesting outdoors. Ant food includes fruits, seeds, nuts, fatty substances, dead or lives insects, dead animals, and sweets. Food preferences vary among ant species.

Ants often enter buildings seeking food and water, warmth and shelter, or a refuge from dry, hot weather or flooded conditions. They may appear suddenly in buildings if other food sources become unavailable or weather conditions change. A new colony is typically established by a single newly mated queen. After weeks or months of confinement underground, she lays her first eggs. After the eggs hatch, she feeds the white, legless larvae with her own metabolized wing muscles and fat bodies until they pupate. Several weeks later, the pupae transform into sterile female adult workers, and the first workers dig their way out of the nest to collect food for themselves, for the queen (who continues to lay eggs), and for subsequent broods of larvae.

As numbers increase, new chambers and galleries are added to the nest. After a few years, the colony begins to produce winged male and female ants, which leave the nest to mate and form new colonies. Argentine ants differ from most other ant species in California in that their nests are often shallow, extending just below the soil surface. However, under dry conditions they will nest deeper in the soil and under building foundations. In addition, Argentine ant colonies are not separate but linked to form one large super colony with multiple queens. When newly mated queens disperse to found new colonies, they are accompanied by workers rather than going out on their own as most other species do.

Ant management requires diligent efforts and the combined use of mechanical, cultural, sanitation, and often chemical methods of control. It is unrealistic and impractical to attempt to totally eliminate ants from an outdoor area. Focus your management efforts on excluding ants from buildings or valuable plants and eliminating their food and water sources. Reducing outdoor sources of ants near buildings may reduce the likelihood of ants coming indoors. Remember that ants play a beneficial role in the garden in some cases. Become aware of the seasonal cycle of ants in your Orange County and other areas and be prepared for annual invasions.

To keep ants out of buildings store attractive food items such as sugar, syrup, honey, and pet food in closed containers that have been washed to remove residues from outer surfaces. Rinse out empty soft drink containers or remove them from the building. Thoroughly clean up grease and other spills. Remove garbage from buildings daily and change liners frequently. Look for indoor nesting sites, such as potted plants.

When numerous ants are found on plants, they are probably attracted to the sweet honeydew deposited on the plants by honeydew-producing insects such as aphids or soft scales. Ants may also be attracted up into trees or shrubs by ripening or rotten sweet fruit or floral nectar. These ants can be kept out buildings by trimming plant branches to keep them from touching structures or plants so that ants are forced to climb up and down the trunk to reach the foliage.

If ants can be thoroughly washed away and excluded from an area, an insecticide is probably not necessary. Vacuuming up ant trails or sponging or mopping them with soapy water may be as effective as an insecticide spray in temporarily removing foraging ants. This removes the ant's scent trail, especially if thorough cleaning is done at the entry points. Some soap products such as window cleaners can kill ants on contact but leave no residual toxicity. Certain plant-based oils are also applied for this purpose, but their odor can be offensive and they leave no residual product to eliminate future forging ants.

The common method being used to prevent ants from coming indoors is to apply a perimeter treatment of residual sprays around the foundation. This method of ant control, with these store bought products has a problem. It only deals with the problem and not the cause of the problem. It only deals with the forging ants, leaving the cause of the problem, nesting ants on the property intact. This method actually forces the nest to expand by creating more ants and even more nests. Wheeler's pest control uses only the best and most effective products to eliminate the ant nest. 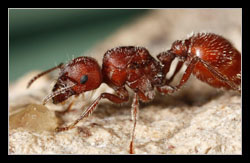 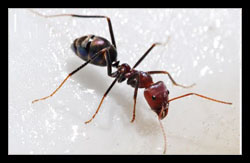 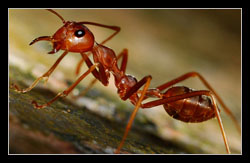