The opossum is the only native North American marsupial. Marsupials are distinguished by their abdominal pouch used for carrying their young. The opossum is not native to California, but was introduced many years ago from the east coast of the United States and has now become well established throughout much of the state. It is about the size of a house cat, has coarse grayish fur, a pointed face, and hairless, rounded ears. With its long hairless prehensile tail, they can carry things such as nesting materials and even hang upside down from a tree branch. They are about 2 to 3 feet long, including the tail, and weigh up to 15 pounds. They all are well adapted for climbing.

In urban and suburban settings they may den under steps, porches, decks, garden tool sheds, and if accessible, in attics, garages, and beneath houses, where they make an untidy nest of sticks and whatever else may be available. They have complex but flexible social relationships, with overlapping home ranges that allow high populations to develop when food is plentiful. In its foraging, the nocturnal opossum is a true omnivore, feeding on fruits, nuts, green plants, insects, snails, snakes, frogs, birds and their eggs, and small mammals such as meadow voles, mice, and rats. It eats both fresh meat and carrion and is often seen feeding on road kills. Some that live near people may visit vegetable gardens, compost piles, garbage cans, or food dishes intended for dogs or cats. Having lost much of their natural fear of people, they will even enter a home through a pet door in search of food. Fortunately, they are not aggressive unless cornered, when they may hiss, growl, and show their teeth. They will get into fights with dogs and cats and can inflict serious injury with their mouthful of sharp pointed teeth they carry diseases such as leptospirosis, tuberculosis, relapsing fever, tularemia, spotted fever, toxoplasmosis, coccidiosis, trichomoniasis, and Chagas disease. They may also be infested with fleas, ticks, mites, and lice. Opossum are hosts for cat and dog fleas, especially in urban environments.

Control methods for them are the same or similar to those for skunks and raccoons. Opossum do not usually become as numerous as raccoons sometimes do and are not as objectionable as skunks. They are highly adaptable and are great survivors. Once they have invaded a neighborhood they are probably there to stay so long as food, water, and shelter are available.

Because they are only active at night, the animals may never be seen as they travel through neighborhoods or yards. Barking dogs and disappearing pet food left out overnight may be the first apparent clues. Sometimes strange looking droppings may be found on garden paths, walkways, and patios, though typically opossum defecate in protected and leafy areas. Since they are messy feeders, you may find remnants of the previous nights foraging and feeding. An occasional visit by an opossum or a family of opossum may not present cause for concern unless you have pets that remain outdoors at night. Pet and opossum confrontations are relatively common and the pets are often injured.

Please fill out your info and we will get back to you shortly
or for immediate attention call 877.595.2847 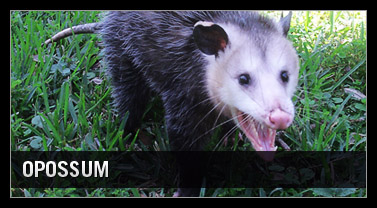